A Guide to Cabinet Latches

A Guide to Cabinet Latches 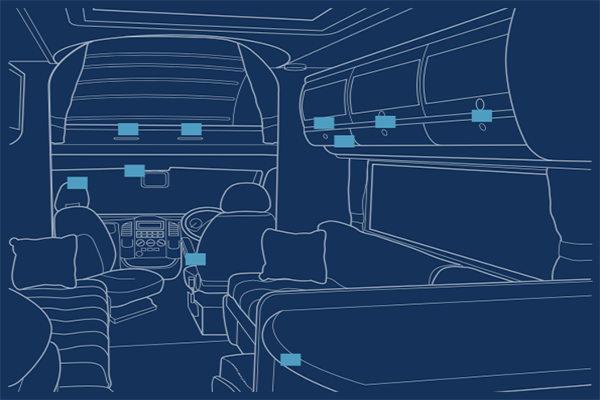 Engineers are required to make multiple design decisions when it comes to determining how to access a cabinet. Some cabinet latch design considerations are critical to application functionality, while others may impact aesthetics. Choosing the appropriate cabinet latch can determine whether the design will succeed or fail.

Not every cabinet door is the same, so one cabinet latch type may not work for all applications. There are several methods of actuation, as well as holding styles which can be slightly confusing for an engineer who is unfamiliar with all the options available to them.

Before exploring different design considerations, a baseline understanding of how a cabinet latch works can help engineers begin to determine which cabinet latch is best suited to their application.

What Is A Cabinet Latch?

The method of actuation depends on how the cabinet will be accessed and whether it complements surface aesthetics. Generally, a user can open a cabinet latch by pulling, pushing, turning, sliding or lifting it with their hands. Some cabinet latches utilize magnets, while others utilize springs. Choosing a cabinet latch will depend on the environment, user needs and more.

Cabinet latches can be designed with magnetic or mechanical forces in order to join the door to the frame. Some users may like the feel of opening a magnetic cabinet latch versus a mechanical latch. Both of these latch types will offer the same functionality.

Many cabinet latches allow the user to lock the cabinet after accessing the enclosure. Some cabinets may contain valuable information or items, which the user wants to protect. Locking latches can be opened with a key or unique tool when the user needs to access the interior of the cabinet.

These cabinet latches all provide the same functionality – to access the cabinet. The only real difference is the method of actuation. There are multiple ways that a user may want to open their cabinet, depending on a few factors.

What Is A Touch Latch?

A touch latch allows cabinets to create a handle-free cabinet appearance, while still allowing easy access to the cabinet interior. A touch latch consists of a latch mechanism alone or a latch mechanism and striker. Touch latches can be concealed behind a variety of cabinet door sizes and thicknesses, and use magnetic or mechanical forces to hold the panel closed.

What Is a Push Button Latch?

Unlike touch latches, push button latches are visible from the exterior of the cabinet surface. Users actuate the latch by pushing a button or knob in order to open the cabinet door. Push button latches use a spring to hold the button or knob in the locked state. When depressed, the button compresses the spring forcing the pawl to recess. Releasing the button allows the pawl to return to its locked state.

Another type of push button latch has a knob that sits flush with the cabinet surface when in the locked state. When the knob is pressed it pops out and provides a grip handle that can be pulled or turned to release the latch. Another alternative features a button that is clearly visible on the cabinet surface, with optional pull tabs that provide additional leverage to assist users in opening the cabinet door.

In order to select the appropriate cabinet latch for their application, engineers should use the following application criteria to narrow down their decision.

Engineers can choose from a variety of latch materials, including plastic, steel and stainless steel. The environment where the cabinet latch will be used will largely determine the material type that is needed. A latch may be operating in a manufacturing environment, which would call for different material requirements than a cabinet located within a kitchen.

An obvious requirement for a cabinet latch is the thickness of the cabinet panel. If the cabinet is too thick or thin to hold a certain latch, the latch would not be an ideal choice for the application. Examining the panel thickness before selecting a latching solution can help engineers to avoid making changes to a design later in the process.

One of the defining characteristics of a cabinet latch is the method of actuation. Engineers should carefully consider the unique needs of the end user and what method is best for their environment. For example, a user who wears gloves all day may not be able to open certain types of cabinet latches. Engineers can choose from cabinet latch options that allow users to push, pull, lift, turn or slide in order to access the cabinet interior.

Keeping the contents of the cabinet secure may also be a design concern for engineers. Cabinets that house high value items and sensitive documents may call for a cabinet latch with a locking system. Lock and key systems can be integrated into cabinets to secure their contents.