The Complete Guide to Latch Types

The Complete Guide to Latch Types 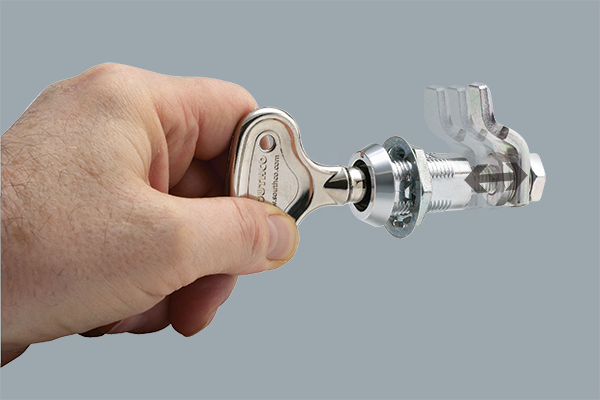 Managing enclosure access is a design consideration that must be taken into account during the product development process. Granting or preventing access to an enclosure can be accomplished in multiple ways. Typically, two surfaces, like a panel and frame, are joined together with a latching or locking mechanism to separate the user from what is secured inside the enclosure.

All latches are designed to keep a surface panel or door closed. The major difference between different latch types is the method of actuation and the mounting method. Ease of access, security, environment and other design requirements can all affect which type of latch should be used in a given application. Knowing the different latch types available can help any engineer design their product properly. But first, a basic definition of a latch should be discussed.

What Is a Latch?

The general population encounters latches every day. From the magnetic handle that opens a kitchen cabinet door to the latch that releases a car hatchback door, latches are used everywhere. Simply put, a latch is a fastening device that joins two surfaces together, while still allowing or restricting access to the enclosure’s interior.

Latches range greatly in complexity depending on the goal of application. Engineers should carefully consider the following types of latches when evaluating the requirements of their unique design. There are a wide variety of latches that can be used to address the needs of different applications.

Cam latches are a simple, cost effective latch type that engineers can utilize in their application. This type of latch consists of a body that is typically attached to a moving panel or door, and incorporates a cam lever that can be rotated to engage a non-moving or fixed panel. Once the door is closed, the cam rotates behind the fixed panel to secure the moving panel or door.

The cam lever is actuated by a simple twisting or turning motion, either by hand or tool. A locking mechanism can be incorporated into the head style for enhanced security. Cam levers are typically used to shut and secure cabinet doors, as well as a number of other enclosures. Cam latches are often available in different materials, including stainless steel and zinc.

A compression latch is almost identical in functionality to a cam latch in that it is composed of a body and cam lever that can be rotated when actuated by hand or tool. However, with a compression latch, the cam creates a clamping force between the two surfaces.

The compression force between the two panels will help prevent vibration or rattling, or can compress a gasket to provide adequate sealing to protect against environmental factors, such as dust or moisture. This can protect machinery from any potential damage from the external environment, reduce maintenance costs and extend its operating life. Compression latches can provide a wide range of compression forces depending on application requirements.

A push-to-close latch holds doors or panels securely by simply pushing the door closed. This type of latch is also known as a “slam latch”, due to its innate ability to resist any damage when a door or panel is slammed shut. Unlike some other latches, the handle does not need to be turned in order for the latch to engage.

The way that a slam latch functions is straightforward. The latch, attached to a swinging door or panel, consists of a body and a cam that is spring loaded. When the panel or door is closed, the cam is either pushed in against a mating surface or hooks around a striker. The cam will then either spring back out behind the mating surface or lock around the striker to secure the panel or door in place.

A keyed lock can be incorporated into push-to-close latches, which can provide additional security. Slam latches will lock in place when closed and may require a lever, handle or trigger to be actuated in order to open the latch. Some other types of slam latches only require an opposite force to overload the friction that keeps the latch in place.

Draw latches utilize tension to pull two surfaces securely together in the same plane. This type of latch is typically made up of two pieces. The first piece will be attached to one panel and acts as an operating mechanism. The second panel will have the securing mechanism mounted, which acts as a keeper. Tension is created when the lever is hooked to the keeper.

Draw latches can reduce vibration or rattling and also provide compression. Due to its simplicity, the draw latch is typically externally mounted on engine hoods to HVAC equipment. Engineers that are designing a simple application may find that a draw latch offers the most cost-effective solution.

A sliding latch is made up of a sliding or rotating body attached to one surface, while the stationary keeper will be attached to the other surface. The two surfaces will become secure when the sliding or rotating piece moves behind the stable piece. Slide latches can be designed to resist both vibration and rattling. Actuation will typically be performed manually. There are multiple styles and materials available for sliding latches, depending on the end application and load requirements.

Choosing the appropriate latch type for any given application requires the engineer to gather all of the relevant information that could affect latch performance, including size, force, weight and environmental factors, such as whether the latch will be used indoors or outdoors.

Outdoor latches have much stricter requirements compared to indoor latches. Engineers will have to account for all environmental factors and weather events, from ice to high humidity. This can lead to design considerations including corrosion resistance and material degradation.

Additionally, there may be compliance regulations and standards for water and dust intrusion that may be required, depending on the industry. For example, latches used in electrical and food equipment may need to meet specific requirements for design, construction or sealing, such as IP, NEMA or UL specifications. Incorporating latches that meet these standards can improve overall equipment performance by ensuring that water and dust do not disrupt mechanical or electrical systems.

When a latch is installed outdoors, security risks increase depending on where the enclosure is located and its interior contents. For instance, a utility company protecting a remote electrical box should install a latch that allows only authorized personnel to access the panel. Engineers should also carefully consider the threat of vandalism and tampering. Generally, outdoor latches will be made out of stronger materials, like stainless steel and have more sophisticated locking mechanisms designed for stronger security.

Another consideration that engineers need to take into account is the latching method. Certain types of latches provide mechanical or magnetic latching to secure the door, cabinet or panel. Some latches have electronic capabilities where the user does not need to apply any direct actuation to secure the latch.

Choosing a hidden or visible latch will depend on the end user’s requirements and operating environment. Visible latches are used when the user needs to see the latch in order to actuate it. Latches may need to be concealed for security reasons, in which case they can be installed behind a door or panel, out of sight. Hidden latches also allow for clean, uninterrupted surfaces, which can improve the appearance of a product or piece of equipment, such as a refrigerator door or gaming machine.

Engineers should consider working with an experienced supplier to ensure that they are choosing the right type of latch for their application. The chosen latch should perform as intended to allow or deny users access to an enclosure. Selecting the appropriate latch type is not only important for proper application performance, but can also impact user perception. For example, a car owner will appreciate the satisfying feel of closing a glovebox if a high quality latching solution has been chosen. This can also improve their overall perception of the vehicle’s quality.

Engineers may need to develop a customized latch in order to create a solution that meets the specific requirements of their application. Contact Southco to learn more about all of the different types of latches available. Our team is more than happy to answer any questions you may have about latches and how they can fit into your unique application.