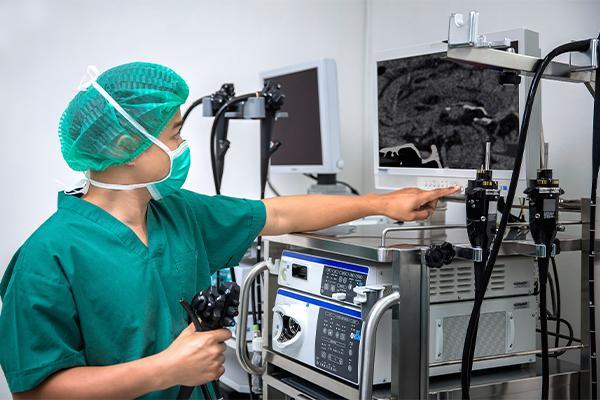 Formed in 1970 from a staff of only four, Olympus KeyMed is one of the world's leading manufacturers of specialised medical endoscopy equipment. Advances in medical technology and the increased need for minimally invasive procedures have led to the routine use of endoscopic surgery in the operating room, requiring improved work flows and system organisation. With the launch of the new Olympus WM-P2 series of workstations, Olympus KeyMed has created an ergonomic and efficient platform design, including a flexible arm to support the viewing monitor, in partnership with Southco. Over a decade, Southco, a global pioneer in engineered access hardware, has been providing Olympus with
standard handbook products, but it was the company’s new patented positioning technology AV arm series that was to provide the key to the creation of a cutting edge monitor mounting solution.

The previous generation of monitor arm on the WMNP1 series of workstation was not ideal for routine height adjustment. Pan and tilt functions were possible but vertical movement was a manual operation and not at all user friendly. “We were looking for a quantum leap in the design of the new endoscopic workstation. Something innovative and competitive, a workstation to enhance the ergonomics and flexibility provided to customers in use,” says Mark Jackson, Head of Business Development, Olympus KeyMed. “We wanted the new platform to provide greater flexibility and to specifically enhance the user experience, particularly in monitor positioning, where the movement needed to be effortless and single-handed. Additional key requirements were to be able to provide greater viewing angles, pan, tilt and also vertical adjustment, both within the footprint of the workstation and when extended.” 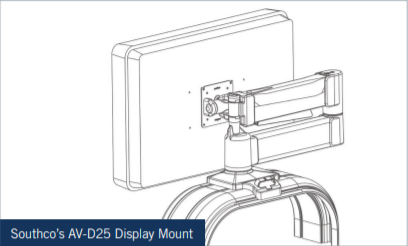 Precise criteria set out by Olympus demanded that its mounting arm should reach a significantly higher level of sophistication and complexity than the existing Southco range, making it a completely bespoke, superior product. Southco’s positioning technology arm provides effortless monitor movement with zero drift functionality. Southco’s solution was the AV-99-4. Previously unrivalled in the sector, the AV-99-4 was borne out of Southco’s patented position  technology, developed for its series of medical LCD mounting arms. The same technology has made it possible to provide a wide range of monitor movement and make it virtually weightless in terms of its motion. A market leading counterbalance mechanism has been incorporated to counteract the gravitational pull against the monitor, allowing fingertip movement of even the heaviest monitors.

“One of the key benefits the arm brings to the workstation is enhanced user experience and operational efficiency,” says Mark Jackson. “The advanced positioning control technology enables users to move and position the monitor without the need for clamps to lock it into position, saving time and effort and making the arms surface easier to clean. The zero drift functionality also means the monitor is securely placed after one movement.”

Teams from Southco and Olympus worked closely together over a six-month period to develop a specification and concept that met their every requirement. A dynamic collaboration between Southco and Olympus engineers gave way to a meticulous and innovative design, from the conception of ideas through to the launch of prototypes that were validated in the clinical environment. Southco tooled up the “Olympus Arm” to best balance its operational expertise in line with its global manufacturing industry. The company used its internal APQP product development process to ensure every aspect of product development and launch was on-time, on budget and to a high standard.The world beating product was assembled within Southco’s dedicated “Olympus Cell” at its UK facility. The “Olympus Cell” is now used as a global benchmark for Southco manufacturing for its portfolio of healthcare products.

The new LCD arm is definitely a highly rated feature for the workstation. We have been able to add value to the workstation system by offering improved quality and efficiency to the endoscopy process,” says Mark Jackson. The workstation monitor can now be easily positioned for every individual procedure and user, with no compromise to the efficiency or quality of the procedure.“Olympus is undoubtedly a premier brand and through Southco’s contribution to the design of the new workstation monitor arm, they have helped to complete a premier brand product. We are pleased with every element of the project and we look forward to the next opportunity.”

<< Back to Previous Page